Hood: Outlaws & Legends is a third person, cooperative multiplayer heist game, set against a medieval-inspired backdrop – think Payday meets “Game of Thrones!” The game pits two teams against each other, whose goal is to be the team that steals the riches from the Sheriff and his ruthless state guards.

There are many successful third-person stealth action games: Metal Gear Solid, Splinter Cell, and Assassin’s Creed to name a few. The approach that is taken with Hood: Outlaws and Legends was to leverage the strong fundamentals laid down by these titles in terms of consequences, player feedback and system familiarity.

In a competitive multiplayer scenario, however, the felony and stealth systems must account for two opposing teams of eight individual players, which is far more challenging to balance. Our design goals were to provide:

Let us start by discussing the guards and their main objective and how this affects the different stages of the heist.

The main purpose of the guards is to protect the treasure chest. A variety of guard archetypes present players with a different gameplay challenge. Some carry ranged weapons and take up sniper positions, others are heavily armored and far more resistant to ranged attacks. Two of the most imposing AI threats are:

Both these guard types play big roles in the 3 distinct stages of a heist:

Their main goal is always to protect the treasure chest, but it is presented differently at each stage.

In stage one, teams must pickpocket the vault key from the belt of the sheriff. If they fail, they risk alerting the sheriff to their presence and being executed by him. In this stage, the AI guards are still protecting the treasure chest, but they are doing it by guarding the key rather than the actual chest.

In stage two, knights are positioned outside of the treasure vault. Their goal is to protect the treasure chest by preventing players from opening the vault.

In stage three, if any stationed or patrolling guards see the treasure chest they will instantly raise the alarms and trigger a map wide lockdown (more on that soon).

Each of these key gameplay beats reinforces the goals of the felony system. There are penalties if the player gets spotted, ranging from getting executed by the sheriff to alerting all the guards in an area to that the treasure has been stolen. Each stage also adds tension through its scaling levels of consequence, both for you as an individual, and to your team as you try and complete your objectives.

Do not be alarmed

A critical ingredient for the felony system is the alarm. We explored several iterations during the course of development. In each version we focused on:

Let’s briefly examine a few of the iterations we tried:

The first iteration of the alarm was an in-world alarm bell that the guards could ring: Guard is alerted to the player -> He calls out to any surrounding guards -> The closest guard to the alarm bell runs to use it -> The guard rings the alarm ->The felony system is triggered.

The alarm bell mechanic had mixed results. It was great for signposting to players how they can prevent the alarm from being triggered e.g. Kill the guard running to the alarm. However, we had problems signposting to the player how long it would take before the alarm is triggered, and which team or player triggered the alarm. This was mainly because a guard had to physically run to an alarm to activate it. The delay between the player’s action and the guard’s reaction led to confusion over who actually caused the felony escalation. A lot can happen in those few seconds, and its tricky to keep track of who was responsible.

The second iteration was what we called “the sentient castle.” For this version, we removed the alarm bell as a physical location within the world. This was replaced with the notion that when a guard raises an alarm, the environment responds: Guard is alerted to the player -> The guard waits three seconds to raise the alarm (providing a window of opportunity for the player) -> The timer ends and the guard shouts to raise the alarm -> The felony system is triggered.

This worked better than the alarm bell iteration as it standardized the length of time it took the guards to raise the alarm. It also improved player understanding as the cause and effect was more immediately apparent. Further helped by the UI gauge which appeared above the guards head as they counted down to sound the alarm.

However, this additional visual feedback (and more obvious window of opportunity) meant that guards could be easily identified and dispatched quickly to prevent the escalation. A lot of the tension, caution and observation that we wanted to promote was lost.

The third (and final) iteration was a refined version of the above. For this version of the “sentient castle,” we took what worked in the original iteration and addressed its drawbacks: Guard is alerted to the player -> The guard instantly raises the alarm (if that guard is killed, any other alerted guard can raise the alarm) -> The felony system is triggered.

The biggest change in this version was removing the three-second timer. Removing this timer fixed three drawbacks of the previous iteration: Players instantly knew if it was their action that caused the guards reaction. The penalty was swift and could not be avoided. There was a sense of tension and caution because is was immediately obvious that if I alert the guards, there will be consequences.

The felony escalation system was created to provide a penalty for players who do not play stealthily, and also to aid the guard’s in protecting the treasure chest.

We required multiple states to achieve this:

Our biggest challenge was defining a consistent set of rules for both High Alert and Lockdown states, but also increasing the severity of the penalties between them.

The first task was to decide how we wanted the felony system to impact the guards, the world and if we wanted any additional exotic behaviors. Our modifiers included:

The Lockdown state affects the whole map. Portcullises gates across the map are closed (blocking main paths between objectives) and reinforcements called to locations around the map, becoming roadblocks. Lockdown also has two additional rules that increase its penalty compare to High Alert.

We did a good job of keeping the rules consistent between each felony state whilst also dialling up Lockdown to feel more oppressive and impactful. However, we found this introduced a few new challenges:

All for One and One for All

We added two penalties for individuals who alert the guards. These are:

Both these penalties end when the guard(s) are no longer alerted to the player, encouraging a return to stealth.

By linking these two mechanics to the guard’s individual alert state (rather than the felony state) it allows us to resolve the missing penalties issue during Lockdown and High Alert. These penalties remain effective even when the map is in a full Lockdown. There is still a consequence and stealth still has value.

It not all about penalties though, we also wanted to incentivize a stealthily approach. To empower players so they feel this is most advantageous way to play the game, especially against the guards.

We achieved this by allowing the following actions to be performed if the player is in the stealth stance.

Assassinations are better than standard attacks which take multiple hits to kill guards and can alert other guards within the area. Certain guards being immune to different attacks while only the sheriff is immune to an assassination.

Players are rewarded for assassinations as they provide a cool cinematic moment of a gruesome kill; reward an amount of gold; reward with XP; fuel the player’s ability gauge; chance to collect a trinket (adds to the lore of the world in the collectibles menu)

Each of these rewards incentivizes the player on multiple levels. There is the immediate reward of getting a cool kill animation that instantly kills the target. There is the mid-term reward of filling the character’s ability gauge so they can use it sooner. There is also the long-term reward of using the XP and gold earned to unlock character progression and in-game shop items.

Lastly, stealth also modifies the mechanics of the game in the player’s favor: The player does not make any sound while in stealth (giving away position to guards, or enemy players); stealth movement speed is fast; guards take longer to detect players in stealth.

These modifiers make stealth the best way to get around the map. Players can move quickly and quietly in stealth. Which makes it less likely that a guard will be alerted to the player providing them with more options. Which in turn makes it easier to assassinate the guards.

It has been a fun and interesting challenge to create felony and stealth systems that react to several players and multiple teams, and to decide when and how to penalise and incentivise certain behaviours.

I hope you find these systems as enjoyable to play as we did to create them. We are now looking forward to getting the game into your hands.

Pre-order now to play ahead of the official release on May 10, and follow the livestream with the Xbox team on May 7 from 11am PT to 12.30pm PT on the Xbox Twitch channel.

Pre-order Hood: Outlaws & Legends to receive:
• 3 days Early Access – start playing on May 7th
• The Forest Lords Pack with exclusive skins! Strike down your enemies with 4 outfits and 4 weapon skins to ensure your place among legends.

We are all Outlaws… but some of us will become Legends.

Faced with a merciless, unchecked state, rebels and rogues battle to claim their place among legends. To win influence with an oppressed people, rival gangs compete in daring heists to hit the wealthy where it hurts. Folk hero or gold-hungry outlaw, only the best will escape with hard-earned riches.

Two teams of 4 players compete to execute the perfect heist, in medieval environments patrolled by deadly AI guards. With the unique skills and mystical abilities of each character, moving in stealth to steal treasures unseen or dominating through loud and brutal combat.

Blood will be spilled. Riches will be stolen. Legends will be reborn. 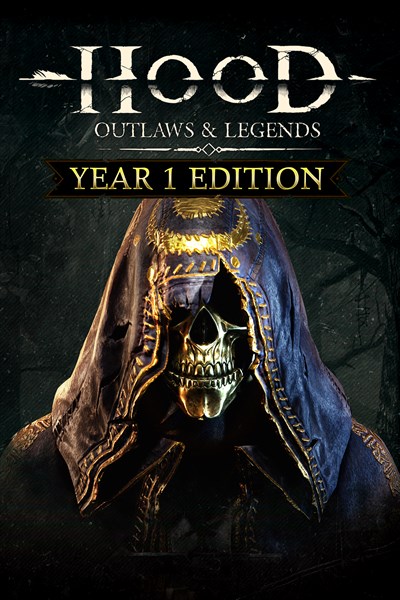 • 3 days Early Access – start playing on May 7th
• The Forest Lords pack with exclusive skins! Strike down your enemies with 4 outfits and 4 weapon skins to ensure your place among legends.

*Season 0 won’t have a BattlePass, but will be filled with free content, community events and game-changing content.

**Battle Passes will be unlocked for a limited time – be sure to play when each Battle Pass opens to earn your rewards. Battle Pass 1, 2 and 3, as well as their exclusive content, will be available for time-limited periods during the first year following the game’s launch.

We are all Outlaws… but some of us will become Legends.