It seems it’s a summer for demons and big metal vehicles. First, Monster Train steamed into the hearts of digital card game aficionados with its tale of high-speed satans, and now good old Hearthstone is at it as well. While its new Felfire Festival event can’t technically be called an expansion as it doesn’t come with a new set of cards, it’s seen a new faction of pirates added to Hearthstone’s autobattler mode, a bunch of new tavern brawls, a 21-mission solo campaign, and – coming later today – a series of PvE deckbuilding challenges pitting you against some classic gits off of World Of Warcraft.

Oh, and of course one of Blizzard’s delightfully cheesy animated music videos, featuring Mecha-Jaraxxus (a sort of cyborg devil, and the baddie from the new solo campaign) giving it a bit of Immortan Joe with his Rusted Legion. With loads of new stuff to do (all of it being entirely free, and none of it buggering up the game’s meta with overpowered cards), I have to say I actually prefer it to recent full-scale Hearthstone expansions.

Once upon a time, Hearthstone’s PvE content piggybacked on the back of its expansions, and tended to slip under the radar as a result. But ever since the Kobolds & Catacombs expansion’s outstanding Dungeon Run adventure in 2017, the solo play releases have been staggered. So much so that they now seem to hold up entire events of their own at the midpoints between expansions.

It still makes things a little confusing. For example, the semi-mechanical devils and the Outcast mechanic from April’s Ashes Of Outland expansion seemed entirely random from a thematic perspective at the time, but the story of this week’s PvE campaign finally puts them into context. Of course, I should remember that this doesn’t really matter at all, as it’s all just different sorts of fun, brightly coloured nonsense. It certainly wouldn’t matter to someone who purely enjoys the game as a competitive exercise. But what can I say? I like a little bit of lore with my oversaturated wizard card games.

For some reason, I find that Illidan Stormrage has a really relaxing voice. Which is odd, because he does not look in any way like a relaxing man.

Perhaps that’s the deal with the split between expansions and sort-of-expansions, then. The card set releases are big, revenue-earning milestones where the competitive game gets updated, and all the serious players honk money at the new cards, while the “mid-season” events are for new players and soppy chumps like me who just enjoy a silly story and some single-player tomfoolery.

Either way, the new solo campaign is great fun, especially given it costs nothing to play and requires no particular cards of your own. It’s not a randomised, see-how-far-you-get business like Dungeon Run, but a series of 21 story-led boss encounters where your deck slowly gets altered as you progress. The story in question is about Aranna, some sort of night elf nerd who seeks out ol’ Illidan Stormrage in order to become a demon hunter and rid Outland of the Rusted Legion. And in fairness, even though it’s pretty light stuff, it’s probably the most developed narrative Hearthstone has seen yet. 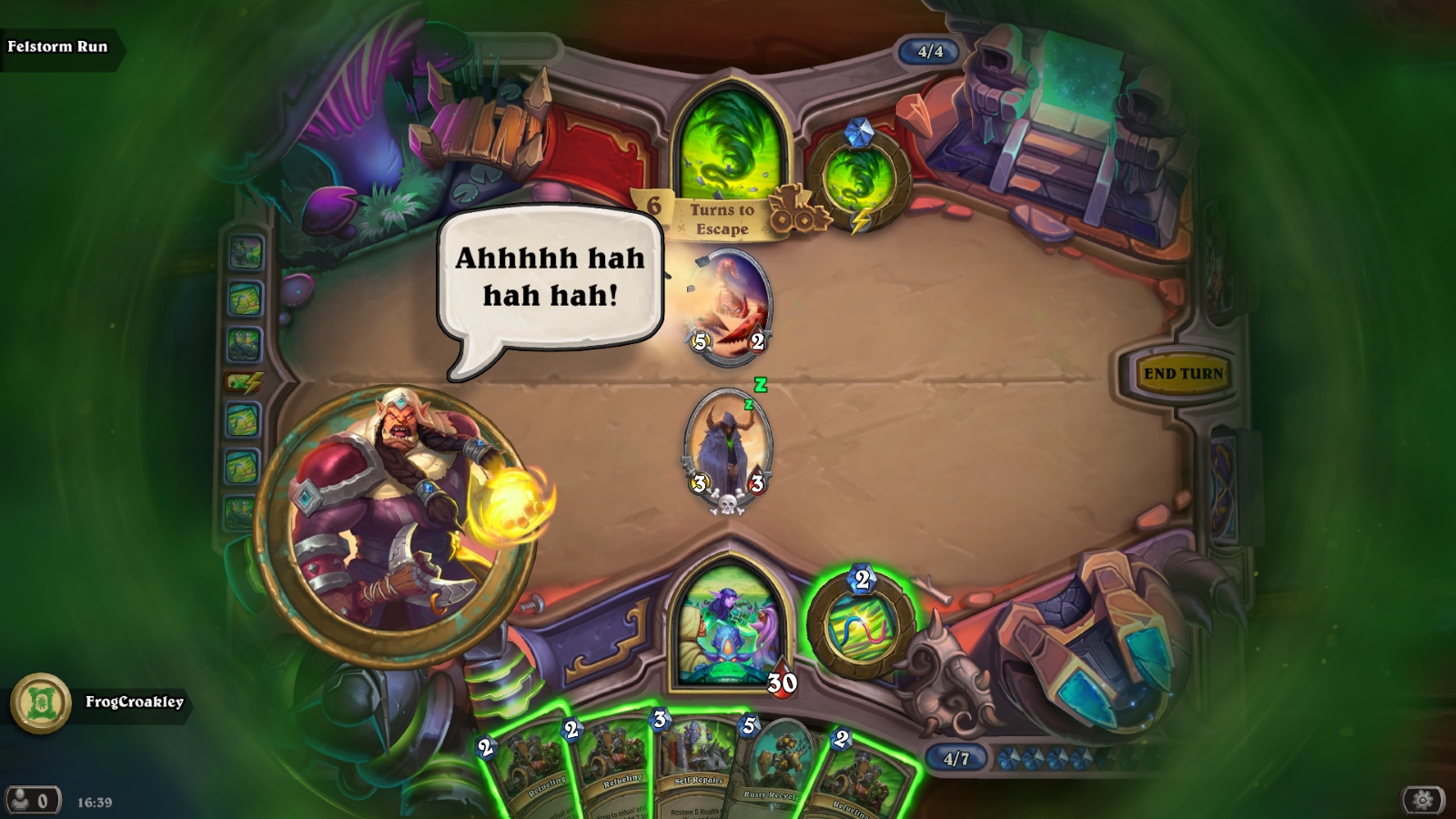 I appreciate this laughing orc.

There’s a cast of characters who join your deck as cards, constant narration in iambic tetrameter by Illidan himself, and some fun set pieces – like the mission where you’re in a big murder wagon trying to “outrun” your opponent (which is a storm), while being pursued by an armada of devil cars. Trying to pull off such bizarre spectacles through the medium of a digital card game really stretches what Hearthstone was originally intended for, and I for one really enjoy the novelty value. The campaign also provides a fun setting for showcasing loads of the new cards from Ashes Of Outland in boss fights that are calibrated around them, rather than an unstable competitive meta game.

It’s been weeks since I could be arsed to build a deck and play Hearthstone competitively, but the Felfire event has reeled me back in nicely, just as it was intended to do.

The 9 worst scientists in PC games

The Mandalorian’s Story Will Continue In Books And Comics

XBOX ONE
Ever wanted to run your own global construction and demolition company? That chance becomes a...

REVIEWS
Join Caddy on a journey as he spends far too much money on the worst PS4 games of all time. Thanks to Yungtown for...

TRAILERS
Four new mighty warriors have been released! Grab a senzu bean and watch this all-new trailer for Season 3 of #DRAGONBALLFighterZ. source

PC
Lego Art is a new line of sets that allow you to build artwork, specifically portraits. The first series consists of sets for...

Brady - July 4, 2020
0
Ever wanted to run your own global construction and demolition company? That chance becomes a...